The Fourth of July is a day for all Americans to reflect, appreciate and celebrate our freedom.  It’s what Independence Day is all about. However, our own Declaration of Independence from Great Britain turned out to be a declaration of freedom for the whole world to hear and match.

Every year the Wall Street Journal and The Heritage Foundation, a Washington, D.C.-based conservative think tank, publishes the Index of Economic Freedom, a study that ranks advanced nations based on 10 key business and societal factors.  In 2009, the U.S. ranked sixth among those 185 countries; by 2013, it had fallen four places to tenth.

The rankings represent both good news and bad news for the U.S. as a nation.  It’s good that we are still in the top ten; it is disconcerting, however, that we have slipped so much in recent years.

That we still rank near the top is a direct reflection of our heritage and our founding principles.  The Declaration of Independence and our resulting Constitution are based on natural law.  And from the start, our journey has been aligned with and rewarded by nature.

So why are we slipping? 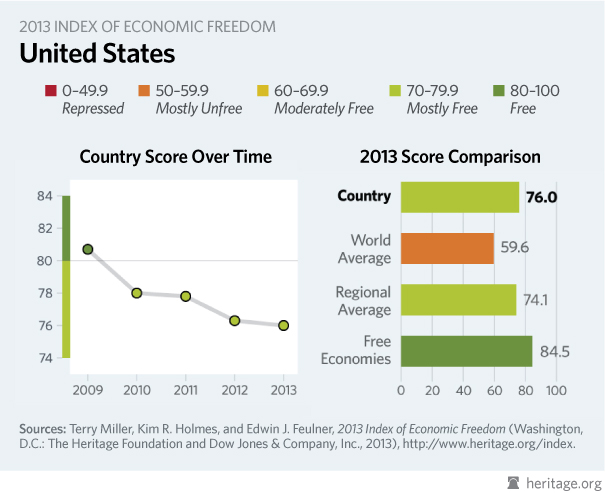 We are suffering the consequences of electing politicians who demonize profits and capitalism—the natural life-springs of freedom and prosperity. We hear their promises of utopia but are blind to their encroaching power and control. A quick look at The Heritage Foundation’s economic freedom criteria – each of which are inspired my Adam Smith’s definitive work, “The Wealth of Nations” – reveals that all ten are managed or regulated by units of government. Clearly, this is not what was intended by those who drafted the Declaration of Independence.

Benjamin Franklin said, “All that’s necessary for evil to triumph is for good men to do nothing.” (Of course, today he would have mentioned women as well.). Thomas Jefferson believed that only a well-informed citizenry is “capable of preventing the corruption of power, and of restoring the nation to its rightful course if it should go astray.”  Because the survival instinct is a dominant part of human nature, the threat of evil will always be recognized and remedied by noble individuals.  Goodness is the dominant side of human nature; evil registers poorly.  Most of us pass the moral tests administered by nature because it is in our own interest to live wholesomely.  It is natural for good to ultimately triumph, and by extension, it is natural for society to pursue economic freedom with same moral vigor that it pursues other individual freedoms.

Our founding fathers were good students of history, and they gained valuable lessons from their relationship with a country that stifled and oppressed their economic freedom.  With their heightened understanding of human nature and a steadfast reliance on reason to anticipate and resolve conflict, they were wonderfully successful in laying the foundation for a best-possible nation.

It is our responsibility as an informed citizenry to uphold those values and to ensure that U.S. economic freedom remains a model for the rest of the world. For my take on how we can realize a BestPossible future for this country, check back on Wednesday for part two of this series on economic freedom and natural law.

I coined the word BestPossible to name a superlative beacon for all occasions, all endeavors,…

Prior Posts
Back To Top